I know that most of you are watching the Grey Cup right now. Well, truth be told I have never really been interested in football whether it be Canadian or U.S.

I do not follow sports as much as when I was young.

Great memories of Jimmy Connors vs. Bjorn Borg; Gerry Cheevers vs. Ken Dryden; Jack Nicklaus vs. well...he was better than all of the rest week in and week out...though I did like Raymond Floyd.

So since I am not watching the Grey Cup I thought I would write a bit more about last week's shop anniversary party.

We have had many young magicians over the years. Many have become quite accomplished in 'magic' as the years have gone by.

However, I must say that I cannot remember anyone of the past quite as impressive as our current customer Mohammed. He is eleven years old; new to the country from Iran.

Mohammed is just wonderful with coins and cards. He has been impressing so many on the weekends with his ability and skill. I have noticed too that over the past month that his presentational skills have really started to grow; perhaps with his  greater confidence of the English language and experience performing tricks for customers his growth will continue to impress in this area.

Near the end of last week's anniversary party I noticed about ten customers most of whom over 25 years old surrounding Mohammed as he, Mohammed, performed trick after trick with regular cards and coins.

For more than an hour Mohammed did tricks, moves, etc. At the end I saw those watching him walking away shaking their head in disbelief at how wonderful is Mohammed.

We never know when he will drop in to the shop with his father or mother (Also, both lovely people.). But I hope that should you visit 'Browser's Den' on the weekend you will have a chance to experience this amazing 11 year old's skill.

Until next time,
Jeff Pinsky

P.S. In case you are curious I was not wearing a sweater-vest when I wrote this blog. Rest assure though that I will be wearing one when I am at the magic shop.

Thanks to all of you who attended the Browser's Den 37th Anniversary Party. And for those of you who could not make it this year, I look forward to seeing you at our 38th...Of course, we hope to see you before next November.

The turnout to the party was excellent. Even more so considering that on the same day was the Santa Clause parade and an important football game for fans of the Toronto Argonauts.

We even had a couple come in from Ottawa just for the party; difficult for me to understand that. But I am truly touched by their sincere efforts to join in on the day.

In fact I am honestly touched by all of you who attended and who have become the heart and soul of our shop; sort of an inner family of customers.

It was my pleasure on behalf of Browser's Den and the Cooper family to award Mahdi Gilbert as the 10th recipient of the Len Cooper Memorial Award.

Quite fitting somehow that Mahdi receive this award at the 10th year. Quite wonderful too that Bernice Cooper was in attendance for the presentation of the award.

Great too that in attendance was Jeff Hinchliffe. Jeff was the first recipient of the award back in 2003.

For those of you who are not familiar with Mahdi Gilbert...check him out on YouTube.

See you in this Blog World next week.

Often customers show me a move/sleight that they are working on for my opinion.

There are MANY details needed to perform and perfect a sleight undetected. I will not go into that today.

However, one point I do remind them sometimes is that one should rotate between performing the sleight and actually doing the intended action.

For example if you are practicing a certain coin vanish...Practice doing the sleight with the coin four or five times. And then stop and actually do the same act except do not do the move/sleight. That is, actually place the coin in the hand for real.

See how your hands move together. Feel how your whole body acts and especially take note of what you are thinking.

Go back and forth between executing the sleight and then doing the exact same movements but without the sleight.

Hopefully that makes sense to you with the goal of keeping your magic looking natural.

Hey, Here is a little quiz.


Below are the first names of those who have received the Len Cooper Memorial Award for most promising young (For those 25 years of age or under) magician.

Email me (jeff@browsersden.com) if you can figure out all of their last names:

Hi there Friends of Browser's Den of Magic

Okay, years ago when we first launched our website, the wonderful Gerry Malisani constructed a  'Jeff's Journal Page' for me to post upon. Many of you wrote lots of stuff and the journal was quite active.

Now all these years later Lisa has set-up for me this new Blog. I will try to keep it somewhat fresh and not write too much about my sweater vests. Of course I do like sweater vests and have been wearing them since I was a kid.

I just never realized until two years ago that some of the regular customers talked about Jeff and his sweater vests.

The Blog will cover all types of stuff and thoughts as well as new product that comes to the shop. Though I will try not to make this too much of a sales pitch.

And for today I will sign-off by writing that I and Shawna, Lisa and Dennis truly hope to see you at this Sunday's 37th (November 18th) Anniversary Party; okay that was in a sense a sales pitch.

And oh if this magic shop thing does not work out...then I will launch a new retail shop 'Jeff's Sweater Vests'.

Welcome to The Den's Blog 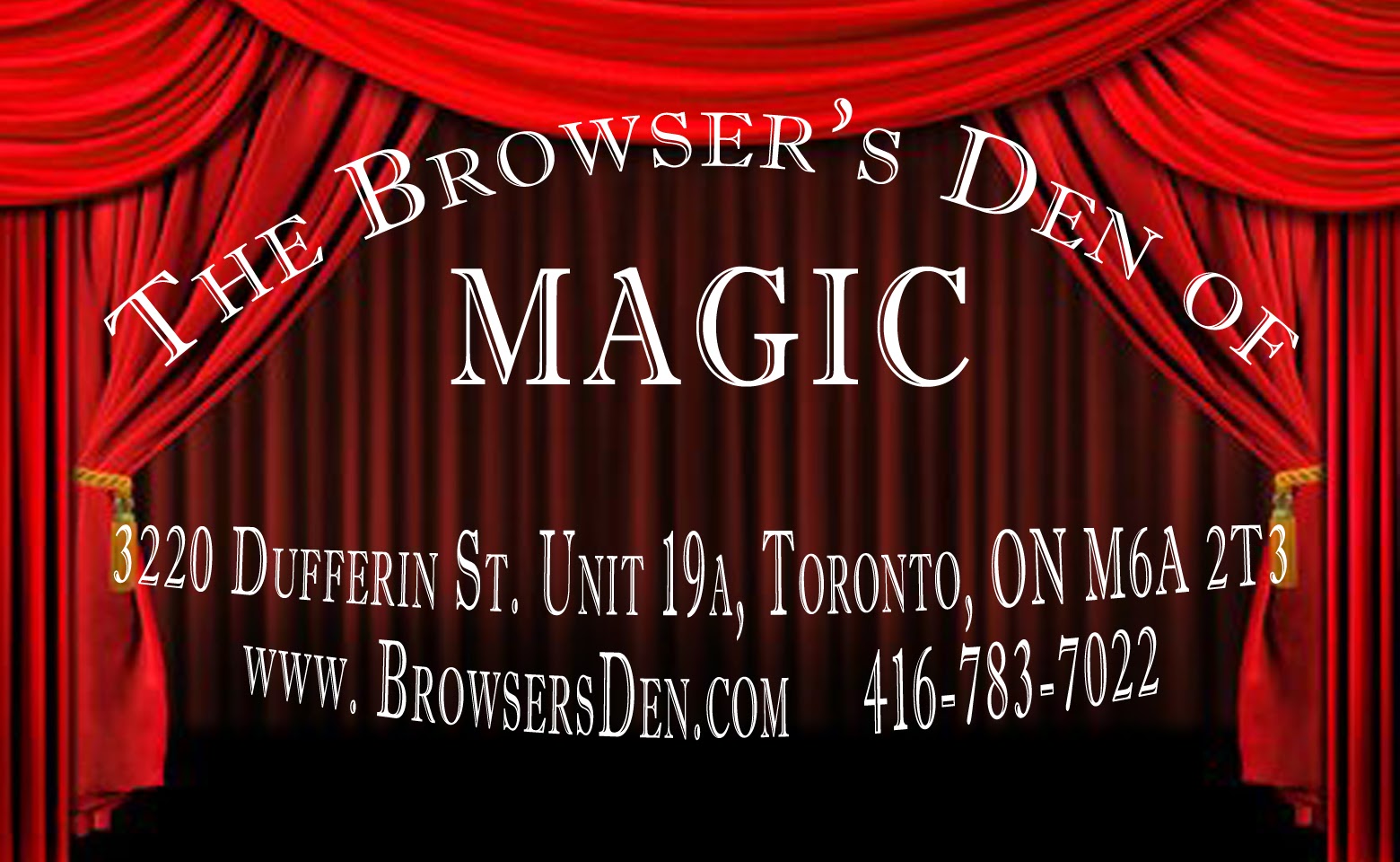 TORONTO’S OLDEST MAGIC SHOP – The Browsers Den has been selling magic in Toronto Canada since 1975, serving amateurs, professionals, semi-pros, and hobbyists both young and old.

There is something for everyone here. As well as magic tricks, books and videos we also carry a full line of juggling equipment, clown supplies, ventriloquist dolls, and jokes.

Hope to see you at our shop!