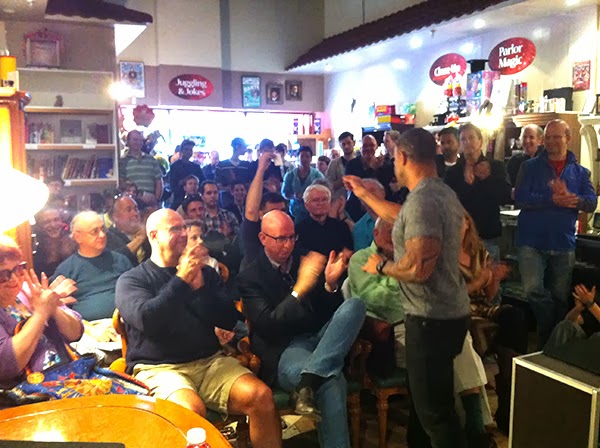 Attending the Bobby Motta lecture at the Browser's Den of Magic this past Sunday, September 22nd (approx. 4pm to 6pm) was like attending a party with a packed room full of friends all gathered together to share some wonderful secrets presented by a charismatic powerhouse of a performer, Mr. Bobby Motta.

Such is his energy and enthusiasm and natural ability to entertain that the two hours flashed by in an instant. Trying to recapture Bobby's performance in print is no easy task - it is so relaxed and he is so genuinely funny that it would be easy to mistake it all for an impromptu session. But that it looks so effortless and natural is because of the years of hard work and dedication to his art that Bobby has undertaken. He admits to close to 3000 professional performances in his 13 year pro career. It shows. Interestingly, he actually started out as a hobbyist at the Den (at its old location on Eglinton).

As Jeff Pinsky, gracious host for the event explained, Bobby's transformation from casual hobbyist into one of Canada's most innovative, creative and sought-after professionals is nothing less than "an amazing journey". Fortunate were we who caught his lecture - unbelievably his very first ever - which included such luminaries in the crowded room as Jay Sankey.

Bobby is what they call a performer's performer. Even if things are going wrong you would never know, or even care because he has the audience eating out of the palm of his hand. For not only is he genuinely funny but he is immensely likable. If an audience likes you, then my friend, you have discovered the true secret of a successful career whether it be in  magic or anything else. If Bobby could sell that secret he could retire a rich, young, and still likable guy!

The lecture consisted of a performance and explanation of (I counted) nine effects out of his attractively packaged lecture notes. (Other mentalism goodies were also on sale at discounted rates.) Everybody came away with something really good. Fans of magic got a fantastic show. Mentalists came away with some killer effects. Card guys and gals got some innovative routines. Comedy aficionados got a lot of laughs. At $10 for admission it was a bargain for everyone.

Bobby began with a demonstration of the variations possible with his commercially available effect, "Blackmail" (a fiendishly clever update of an old principle discussed in Corinda). To discuss it at length would be to reveal its secret, so I won't. I will just say if you want to read minds, get "Blackmail". You won't be disappointed. Jeff stocks it at The Den.

Along with the comedy and the awesome mentalism, Bobby shared some of his philosophy of performance. (And personally I would've liked to have heard even more.) He made a point of explaining that every move he makes has a purpose and that it is important to plot and reason out all your moves. Quite rightly, he concludes, audiences will catch you out on any funny or unmotivated moves.

There followed a number of well done effects that had most folk scratching their heads in amazement. My notes are a bit hard to read at this point as I was probably laughing so much at Bobby's stage antics. I will briefly note his astonishing "Zoom" illusion - which he sells commercially - during which his head seemed to expand like an inflated balloon. No kidding! Very bizarre and very visually effective indeed.

Bobby also had a number of pet card routines which I know the card fans in the room really appreciated. If you buy his lecture notes whenever you get the chance all will be revealed. 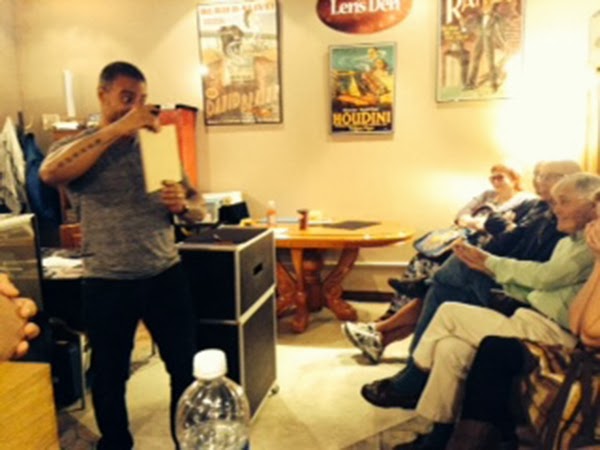 The combination of comedy and believable straight-on mentalism is a rare one (at least IMHO). I often feel one doesn't quite go with the other with most performers. With Bobby the two mesh perfectly. He is totally believable as an intense practitioner of the psychic arts. But he is also so  funny that even when you know exactly what he's doing or how, you just don't care. You just get carried along with his onstage joy of living in the moment.

I especially liked it when he pointed out that "most people never actually see magic in real life" and so you may well be their first live magic performance. You want to make sure, emphasized Bobby, that when you do any effect, even if you are only a hobbyist, that you have practiced it to perfection. "Do them really well, do them beautifully, blow people away with whatever magic you do." A man of his word, Bobby's first lecture blew everyone away and created a memorable afternoon that excited and inspired all who attended.

Thank you Bobby Motta for such an enjoyable, enlightening afternoon.

And thank you Jeff Pinsky for hosting yet another excellent special event at the Den.
Posted by Browser's Den of Magic at 15:27